POORTI-14 All about chemotherapy for breast cancer

The concept of chemotherapy comes with mixed feelings of anxiety and indecisiveness for many. Not knowing what would happen to you, or what to expect can be very stressful for you. In this article, we have tried to cover the terms that you might hear while going through your chemotherapy, encompassing all the steps and types of treatment, and the side effects.

THE MEANING OF CHEMOTHERAPY

Chemotherapy is the use of anti cancer drugs to destroy cancer cells that are growing in your body.

Chemotherapy affects cells throughout the body. 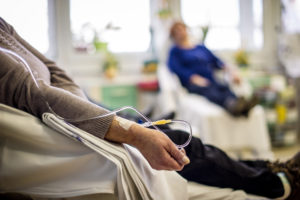 Cancer that has not spread beyond breast tissues and lymph nodes under your armpits is termed as primary breast cancer. Chemotherapy is usually followed by mastectomy. Radiotherapy may also be given simultaneously.

THE NEED AND BENEFIT OF CHEMOTHERAPY

Whether you require chemotherapy is primarily decided by the grade of your cancer (how different your cancer cells are from normal breast cells and how quickly the cancer cells are growing). Other normal health conditions are also taken into account. The following kinds of pathological tests might be conducted where the oncologist can estimate what benefit you may get from chemotherapy:

Genomic assays (also called gene expression profiling or gene assays): These tests look at groups of genes found in the breast cancer. The tests are carried out on breast tissue removed during surgery. These tests are not suitable for everyone.
a. Oncotype DX: Determines the chances of recurrence of breast cancer. Depending upon the recurrence score, chemotherapy is recommended. In case the score is higher, chemotherapy will be recommended.
b. EndoPredict/ Prosigna Breast Cancer Prognostic Gene Signature Assay: Determines the likelihood of the cancer spread within 10 years. The result is reported in terms of high risk or low risk. 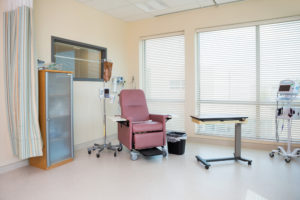 Chemotherapy is usually given as a series of treatments with a small gap of duration after each treatment, to allow time to your body to recover from any short term side effects. Chemotherapy may be given weekly or fortnightly.

The combination of drugs given during chemotherapy is tailored according to the type of your cancer. This also determines the number of cycles you would need to undertake.

An intense form of chemotherapy, known as dose dense chemotherapy is also under testing. In this, the same dosage of drugs are given at a shorter gap duration.

Before starting chemotherapy, most hospitals would arrange for a chemotherapy information session, where you would be informed about how and when chemotherapy would be given to you, and how would you endure it.

Usually chemotherapy is given after confirming a written consent. From time to time, you would have blood tests to determine if your red blood cell count has dropped below a certain level. In such a scenario, chemotherapy may be paused.

The drugs are usually given in a chemotherapy room, in the presence of an oncologist. You would be seated comfortably in a chair, where the drugs would be given to you. 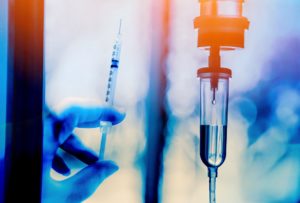 Chemotherapy can be given:

It is important to take all the medicines as prescribed in the hospital exactly in the way stated, for best action. There would be regular blood tests that would be conducted. In case you are unable to keep an oral medication down, you should immediately consult your oncologist and inform them of the same.

Your chemotherapy team shall guide you on how to deal with these symptoms.

On a personal front, many women prepare themselves mentally for pronounced side effects like hair loss and menopausal symptoms. If you are feeling very distressed, you may like to speak to a counsellor for assistance. After treatment is over, you may wear a wig, hat or scarf for some time until your hair grows back. A healthy, nutritious diet and regular light exercise is proved to be effective during this time.

If you want to read more in detail about the kind of side effects you might be exposed to during your breast cancer treatment, you may refer to www.aarnabiomed.in/poorti-08-side-effects-of-breast-cancer-treatment.

Chemotherapy may or may not be followed by radiation therapy, to destroy any cancer cells that might have escaped the drug, which further reduces chances of cancer recurrence.

The price of a complete Poorti kit, comprising of ONE light weight silicone breast prosthesis, TWO pocketed brassieres, TWO breast prosthesis covers, ONE prosthesis holder and ONE outer waterproof kit, varies from Rs. 4500 till Rs. 6750 (Rs. 250 increment as the size of breast prosthesis increases). This price is inclusive of 12% GST (Government tax).

This price structure is in place pan-India, since 1 Jan 2018, and we have NOT increased the price, inspite of the Covid induced economic hardships.

If you were overcharged in the past or have paid more than the above price, please CONTACT us with evidence, and we will provide you 100% REFUND.